WHAT GOOD DOES AN INNOVATION WORKSHOP DO TO ELEVATE YOUR IDEA?

(日本語) A Report of Capacity Building Workshop In India

A Report of Capacity Building Workshop In India 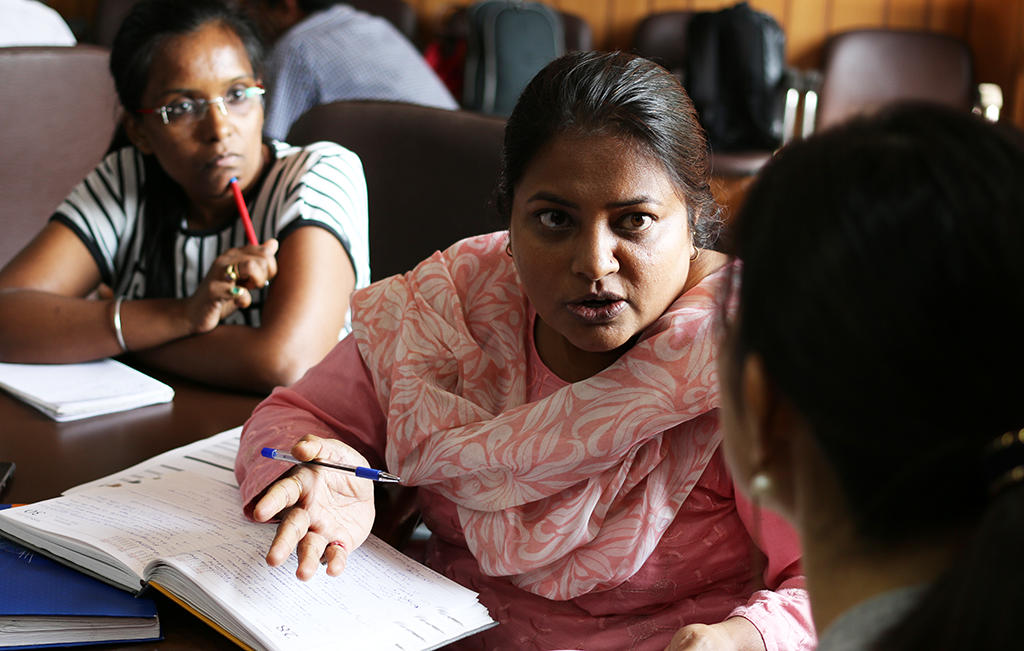 So institutionalized innovation is a hot issue in humanitarian space. But we also know that innovation is very hard to capture until it takes concrete shape, and we never have enough time and resource to invest in such uncertain and risky projects, and it is rare for a NGO to have its own dedicated Research and Development function. This kind of notion and reality hold most of NGOs back from even starting to think about generating unconventional projects except for few outliers. Nonetheless, this is very clear to entire humanitarian space that grassroots innovation needs to be fostered by more frontline NGOs to cater to needs of affected communities in Asia, who are facing ever increasing risks. The question, then, is how we can possibly lower the hurdles of starting innovation project for the frontline organizations. This is the very reason ADRRN Tokyo Innovation Hub (ATIH) convenes workshops for ADRRN members who are ready to move forward but unsure of how to do it. 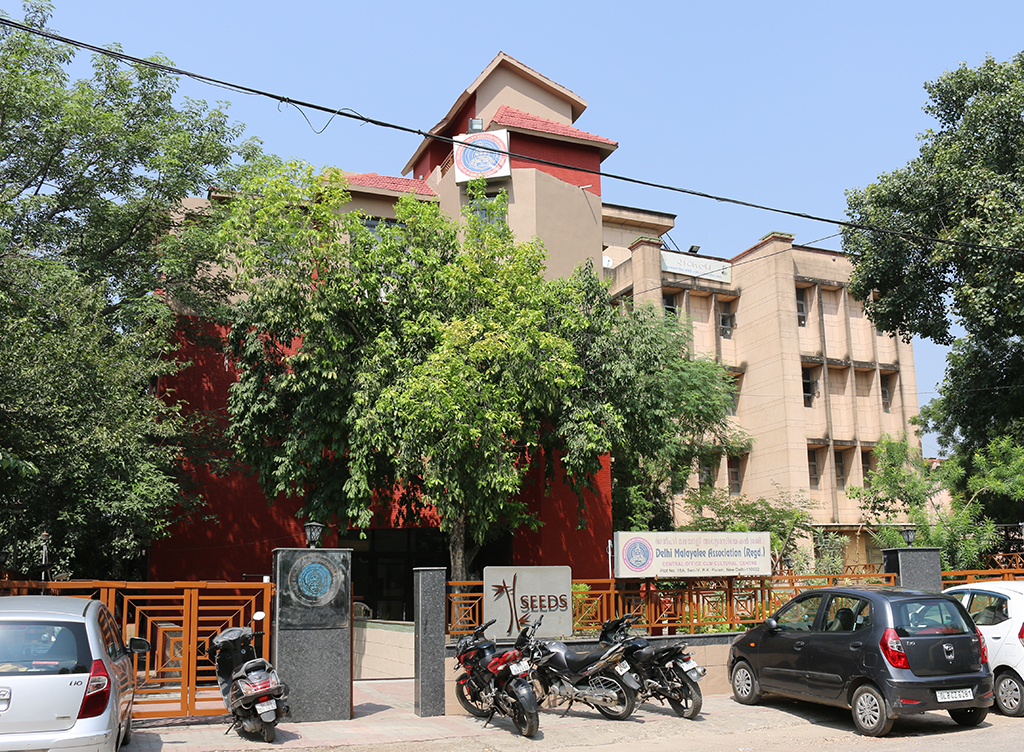 SEEDS India (Sustainable Environment and Ecological Development Society India) was established in 1994 with its ultimate goal to “protecting the lives and livelihoods of people exposed to disasters,” focusing on integrating locally based approach into each of their programs. They are committed to individuals and reach out to families affected by earthquakes, floods and cyclones; restored schools and homes; and have dealt with education to build long-term resilience of the communities. Despite having developed many innovative projects in the past, SEEDS India saw institutionalizing innovation as a critical factor for further development of their organization, and therefore, a two-day in-house workshop was convened on September 26 and 27, 2017. The aim was to create a safe space for its staff so they can explore new ideas with guidance apart from their day-to-day operation. 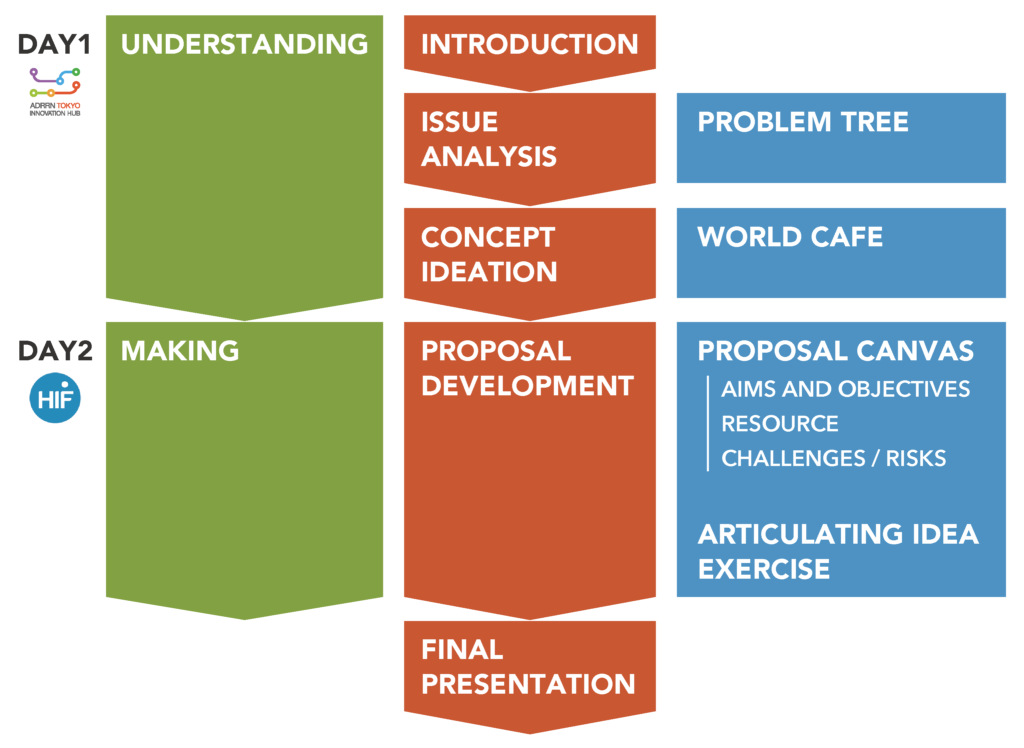 The workshop was designed to guide the participants to experience the very initial stage of innovation process. One of the unique feature of the program is that the participants can start with very broad idea, but can develop their ideas into specific concept at the end of the workshop. Takeaways for the participants varies depending on their focus and idea stage, but everyone can understand the process and building blocks of the innovation projects. The first day focused on issue analysis and concept ideation, the purpose of which was to clearly identify cause and effect of stated issues, facilitated by ATIH. The second day went further on to develop building blocks of the project, which was led by the Humanitarian Innovation Fund (HIF). 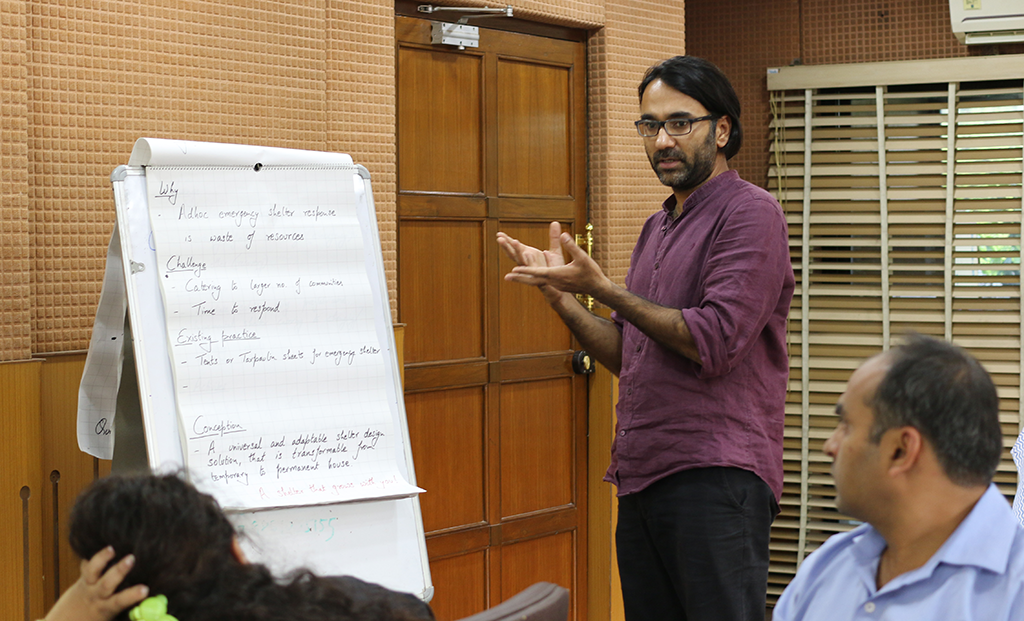 Four teams (School Safety, Localization, Urban Resilience, Emergency Shelter) generated and developed innovation concept and presented on the second day. They were all in different stage, and their learnings also varied. In case of Emergency Shelter team, they had had idea of the transitional shelter that can cater to the immediate and long-term shelter needs of the disaster affected communities by providing a simplified modular system that is adaptable to different geo-climatic conditions and available resources. They had even tested the products in the field. The most significant change we observed in the team was the perception of team members toward the project. Initially, their attention was on specific issues as to how to lower the cost and speed up the process. However, through working on exercises, they started to envision scalability of the service and clear goal. It was also discussed how to make the transitional shelter to be accepted as de facto standard, and ideas such as engaging with the government and collaborating with companies and universities were generated in the team. Such components were absent before the workshop and issue analysis and concept ideation helped them redefine their concept. 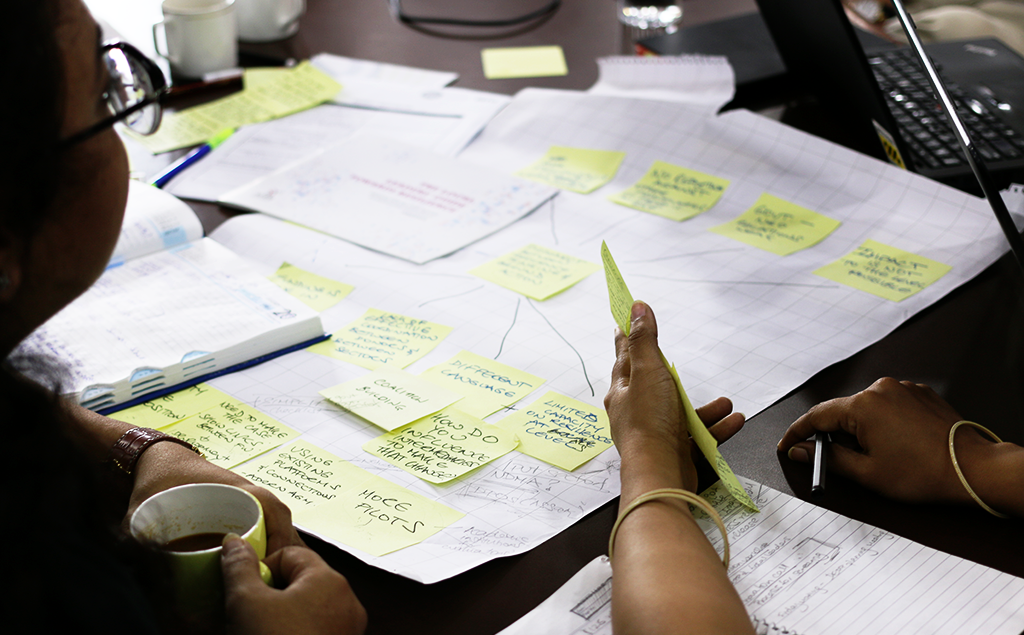 In another case, Urban Resilience team had selected ‘eve teasing’ as an issue contributing to school girls’ drop-out. They knew there were multiple causes for eve teasing such as school infrastructure, gender education, road condition, and low awareness of parents. They also came up with several ideas to address those issues such as ‘safety kit’ development and awareness program for parents and boys, and improving school infrastructure. Initially, they found it challenging to identify one effective solution that mitigate eve teasing because the issue is too complex. What they discovered through the workshop was, as they analyzed cause and effect and structuralize the issue, they were able to consolidate several ideas into one program idea, which was community awareness program using safety kit, containing light and personal alarm to protect girls, as a communication tool to bring together all the stakeholders on the course of developing the kit. This case shows how multi-dimensional understanding of a certain issue can turn what-appear-to-be conventional ideas into unconventional but also relevant concept.

The workshop offered the space and method to broaden or shift the perspective of the participants and help them re-define the project scope. The concept developed in the workshop will be followed by ATIH and the HIF, including access to funding and other innovation resource. Another workshop can be planned, upon each team’s request, to invite potential collaborators and stakeholders to refine the concept and make it more viable.