The trends of increase in number of extreme and disastrous weather events have been observed globally. In May 2016, the highest ever temperature was recorded in India with 51 degree Celsius, furthermore, the country faced floods in the rainy season. City of Varanasi with the population of 1.75 million in Uttar Pradesh State also recorded higher than normal temperature in May and experienced severe floods in August 2016. Although Indian Meteorology Department is forecasting weather information broadly on daily basis, there is no timely information on torrential rains and measures of rainfalls in micromesh of the city.
Indian Prime Minister HE Narendra Modi Visited Japan in 2014, and started his visit with Kyoto. That time, Japanese Prime Minister HE Shizo Abe went to Kyoto to receive him. In their presence, Kyoto Varanasi partnership agreement intention was signed between the city of Kyoto and city of Varanasi. Both the cities are old cities, and have lots of similarities in terms of cultural context. As a part of the agreement intention, different levels of cooperation started between the two cities, and SEEDS Asia started a community based learning program along with its counterpart Benaras Hindu University.

The city of Varanasi has different disaster and environment related issues. The city faces traffic paralysis because of the unexpected torrential downpours which fell in stuffed and poor drainage system in the city (Figure1) . The pupils are being in trouble due to the blockage of the roads by inundation, and the parents are having no choice but to wait without any information. Since schools are also supposed not to keep their students till night time, it has been a major challenges for all the schools to decide when to flee their students before the accessibility is limited. Besides, the city also has differential pollution level, which increases during the winter season. Therefore, it is important to have daily check on the environment and disaster related issues in the city. 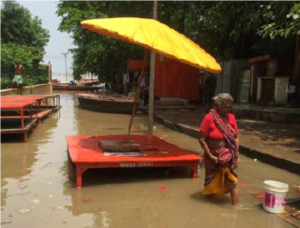 In order to facilitate to solve the issues above, SEEDS Asia in partnership with Banaras Hindu University launched a three years project (October 2015 – September 2018), “Participatory Community Based Disaster Risk Reduction Approaches in Varanasi” though establishment of Climate Schools (CSs) with the equipment to obtain scientific data on weather in order to build capacity on Disaster Risk Reduction of Varanasi and activating the citizen’s DRR activities.
The key partner was the five climate schools in Varanasi, which, in turn will have three each outreach schools. The teachers and students of these schools are the core project partners. In addition, the local communities, especially the resident welfare association are also involved along with the schools (Figure 2). 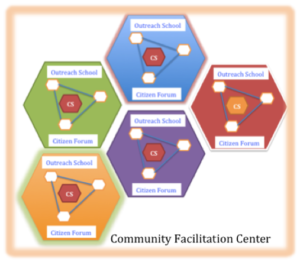 For data collection and risk management activities on climate disaster in schools and the residential community nearby, five CSs are selected from five zones, and five Citizen Forums (CFs) are organized by formulating representatives from the surrounding community. Each CS is equipped with weather observatory devices such as CCD camera and automatic weather station (AWS) (Figure 3) which can measure wind speed, wind direction, humidity, temperature and rainfall as well as derived readings include wind chill, heat index, dew point, etc. The members of CFs from the residential area became focal persons to receive the weather information from the CS nearby and to lead community based activities for disaster risk reduction in respective area. The observatory data are accumulated and recorded in CSs, being in a manner accessible to or observable for 24 hours to any by minutely, hourly, monthly and yearly basis through internet with application . Also, there were environmental monitoring equipment installed in each school. 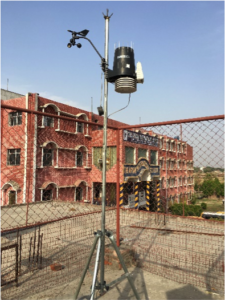 Collection, evaluation and analysis of the data which are being obtained from the CS are beneficial to the academic community especially to the field of meteorological and disaster risk reduction in Varanasi. These researches are important for decision making at different level from individual to the planning of the city. The project focus at the grassroots level as initial stage, thus a series of trainings on understanding on weather and climates risk such as understanding of geographical features, rainfalls, town watching program to understand the risk and resources of neighborhood are conducted for each CS and CF. Based on their findings, mitigation measure are discussed and planned at community and school basis, then each school has identified the certain level of rainfalls when they decide to flee their students to home or to announce the cancellation of class in associated with the bad weather so that pupils would not be facing the flood unnecessarily. The accumulation of data will contribute to research outcomes, and mobile application made easy to anyone to access the timely and handy weather information, which enables them to take early decision and action.

One of the best outcomes of this project are the students of CSs who are aware of the risk of climate and taking initiatives to cope with. They are the main ambassadors to the people of the city and for the next generation. They publish “Prahari” Student Climate Newspaper (Figure 4) to raise awareness on climate issues and promote DRR activities by sharing the collected data from AWS from CS, writing poems, quiz and reports on weather, introducing activities of CFs, etc. By engaging the school and students of CSs, the information reach out to their parents, and by involving CFs, tangible actions are also taken for improvement in their community, which are found in their active partition and relief activities during the flood in 2016. The outcomes shows that the project for Participatory Community Based Disaster Risk Reduction Approaches in Varanasi contributes Priority 1 of SFDRR (Sendai Framework for Disaster Risk Reduction): Understanding the disaster risk, through collecting of scientific data on weather and promoting of understanding the risk for enhancing disaster preparedness though participatory approach in school and community. This is a case how scientific evidenced data made people move into actions for enhancing the community resilience. 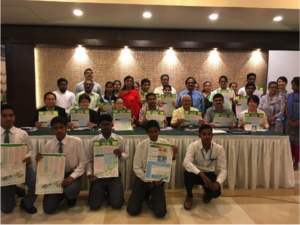 1.Average of temperature in Varanasi in May is 40 Celsius degree (1998 to 2012 base)
https://weatherspark.com/averages/33932/5/Varanasi-Uttar-Pradesh-India
2.According the data accumulation and observation, if rainfall 20mm per hour continues for two hours, the urban flood would occur in the city.
3.The selected five CS are 1. Central Hindu Boys School, 2. Rajghat Besant School 3. Sant Atulanand Convent School, Shri Agrasen Inter College for girls, 5. The Aryan International School in the city.