The case study describes innovative technical and social solutions for safe drinking water in coastal Bangladesh, which is faced with salinity in surface water and Arsenic contaminated underground water. This project worked effectively to develop disaster resilience in rural communities by providing a cyclone-resistant house, safe and clean water as well as livelihood through vegetable cultivation. Precisely, these results and achievements contributed to the capacity development in the fields of DRR (cyclone risk reduction), health (reducing risks of diarrhea by clean water), safety and security (avoiding for women to go for a long walk for getting drawing water), food security (harvesting vegetable) and sustainable livelihood (obtaining cash income by selling vegetable). The project was implemented by Concern Worldwide in Bangladesh. This case study is an excerpt from an earlier study conducted by Takako Izumi, Rajib Shaw and Saroj Dash.
Reference paper: Izumi T., Dash S. and Shaw R. (2015): Experience of Bangladesh: Focus on Innovative Models of Private Sector Engagement in Risk Reduction, in Disaster management and private sector, Izumi T. and Shaw R. (eds), Springer Publisher, 247-264.

Bangladesh’s geographical location and land characteristics make it one of most hazard-prone countries in the world. Bangladesh primarily consists of low and flat land with some hilly areas in the northeast and southeast and is one of the most climate vulnerable countries in the world. The country has been frequented by a range of natural hazards throughout its history, including cyclones, floods, droughts, tornadoes, river bank erosion, earthquakes, tsunamis, high arsenic contents in ground water, water logging and salinity, etc.
In Bangladesh, the government, international agencies and NGOs are considered as primary actors in disaster management although the responsibility for providing a framework of legal and institutional structures still remains the government. Over the years, especially the roles of NGOs and donor communities have increased significantly. In addition, private sector involvement has a potential for undertaking activities that would combine business interests and broader social concerns and needs. In this section, the roles and activities of each stakeholder are examined on how they have been involved in disaster management and what are their major contributions.
Concern Worldwide is an international NGO and has been working in Bangladesh for many years in various areas such as climate change, health, livelihood, education as well as emergency response. It has been also collaborating with the private sector in project planning and implementation processes. A rainwater-harvesting project managed by Concern Worldwide is introduced in the next section as a business model of private sector partnership. In Bangladesh, the roles and activities of national and local NGOs are also crucial especially in rural areas to strengthen advocacy, public education campaigns and training programs for personnel involved in disaster management from the national down to the union or community level.

The impacts of climate change are observed in different aspects in Bangladesh, starting from temperature, precipitation change, sea level change, and changes in cyclone or tornado intensity, time and path. For Bangladesh, intensified and frequent natural disasters and climate variability are the key impact of climate change. Hence, reducing disaster risk is the most effective strategy for climate change adaptation.
During past several cyclones, the huge storm surges have affected the surface water by making them saline, and thereby posing a serious threat to the drinking water. This is also aggravated by constant use of aquaculture, and pumping a huge amount of underground water and by depleting water table. Above this, there is a perennial threat of Arsenic contamination in the underground water. As a result, it strongly affects agriculture, food production systems and water sources especially due to rising sea level and salinity in soil and water. The scarcity of fresh water availability and saline inundation in coastal areas have severely impacted the primary source of livelihood and supplementary income of rural household such as homestead gardening, poultry and animal husbandry.

Concern Worldwide initiated a rain water harvesting project in collaboration with a private company – the Gazi Tank Company (GTC) to reduce risks to natural disasters and climate change as well as provide vulnerable households with a storm-resilient house, a rainwater harvesting system as well as vegetable cultivation to maintain livelihood and their won food security. The rainwater harvesting model has been identified as a potential and effective mode of water supply for drinking and homestead vegetable gardening based on the meteorological data in the areas. Bangladesh has a relatively higher amount of rainfall, with annual average is close to 2,000 mm per year. Most of the rain is concentrate during the months of May to September. Rainwater availability in the months of April, May, September and October are also sufficient for cultivation and other needs. Farmers are in need of water for cultivation for the months of November to March. Soil moisture in November is sufficient for cultivation; hence require less water. Water requirement for vegetable cultivation in December and January are high and the model has been designed to store the water for the crisis period and promote a crop cycle. This project consists of three key components: 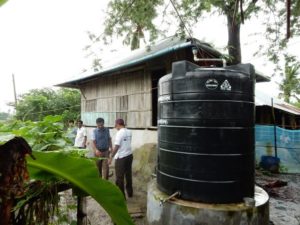 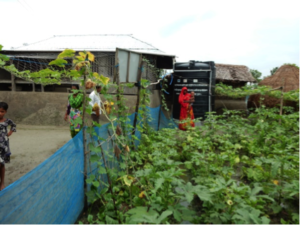 Concern Worldwide started this project from negotiation with a private polymer tank company on the supply deal of polymer tank with accessories at community level. The company agreed to supply a minimum of 2000 tanks at 30% subsidized rate inclusive of transportation with soft-term repayment mechanism at community level. The user set up the integrated “Rainwater Harvesting System (RWHS) for safe water & improved agriculture” models with technical support from Concern Worldwide and other partners. The user would adopt home consumptions and marketing strategy to ensure “food and income security”. The ‘income’ was targeted to enable for the investment of private sector to be recovered within a maximum time period of three years. The company was allowed to advertising their CSR compliances and also explore opportunities to get involved in for developing a “resilient community”. The compnay also did some technical innovation to use a specific material in the inner wall of the tank, which allows some air circulation, and therby providing an atmosphere to keep the water for a longer period of time.
The assessment depicts that the “RWHS for safe water & improved agriculture” requires an initial investment of Tk. 21,000 of which system installation (polymer tank-2000 litre, accessories, brick platform and setting) cost is Tk. 18,280 and agricultural input & labour (polythene, seeds, fertilizer and labour) cost is Tk. 2720. GTC has agreed to cover the system installation cost (Tk.18280), while Concern is providing the agricultural input & labour cost (Tk.2720). The above cost-benefit analysis depicts that at the end of each year a household can gain benefit from the model in three ways:
1) “Cash income” from vegetable marketing which is obviously the most and it has multiplying effect on overall family livelihoods and adaptation choices,
2) Safe water, nutrition & food security which has high significance in maintaining health concerns as well as increasing human asset;
3) Provision of seed storage that helps the family to mitigate crisis during lean periods.
The pre-research and analysis conducted before this project started presented that each household can meet their annual consumption needs with additional income TK 5000-6000 out of TK 9500 total cash income from vegetable sale. The additional income, therefore, used to pay for the investment cost by GTC. Hence, the total time requires to complete repayment is estimated to be around 3 years.

This is a successful model both in creating business opportunity for the private sector and in contributing to establishing community resilience. The project demonstrated that the investment made by GTC for this project can be returned in three years, however, GTC still needed to compromise the subsidies given through a reduced price when they sold a tank to NGOs and communities. Two major reasons that GTC accepted such compromise were observed: 1) Strong intention and aspiration to contribute to changing local situation and improving living standard of local and vulnerable citizens, and 2) Increasing a publicity and visibility of the name and brand “GTC” and its contribution. Concern Worldwide considers the private sector as an important partner of its project planning and implementation and the private sector should also gain benefits by participating in its project. As such, Concern Worldwide offered GTC to put its name on all the tanks to increase its visibility and promote its name and contribution. GTC has already 75% of the domestic market share of water tanks and 100% of the NGOs market share. The name of GTC has been already well-known and maintained a large market while its major market was still in urban areas, not in rural areas. The collaboration and project with NGOs for rural communities expanded the GTC’s market further beyond urban communities.

Reaching the Unreachable with Disaster Risk Reduction Knowledge in Myanmar »